Economic growth in Greece is projected to reach approximately the level of 2% in 2019 and 2020.

Investment is expected to be the main driver of long-term growth in the coming years, although limited access to finance is negatively impacting businesses of all sizes in general, and SMEs in particular. Household consumption is expected to grow gradually, providing economic support to the country. Insolvency levels are expected to improve this year, however remaining at rates above 4%.

Based on survey findings, Greek survey respondents transacted 68.1% of the total value of their sales to B2B customers on credit (up from 64.1% last year). This is notably above the 60.4% average for Western Europe. This increase in the use of B2B trade credit is highly likely to be caused by businesses needing to expand sales to existing and prospective customers, as well to protecting current sales from competition from foreign markets. However, as this increase appears to be relatively modest it may point to Greek respondents’ strict control on the size of the commercial exposure they are willing to take with their trade counterparties. This signals a sharp focus on customer credit risk mitigation and on the steps businesses take to make sure offering trade credit does not weaken their working capital cycle and ultimately their short-term financial flexibility. 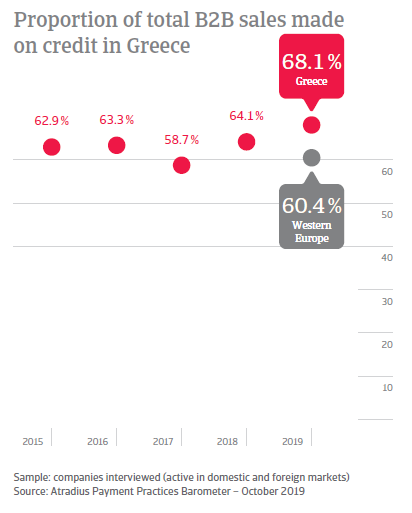 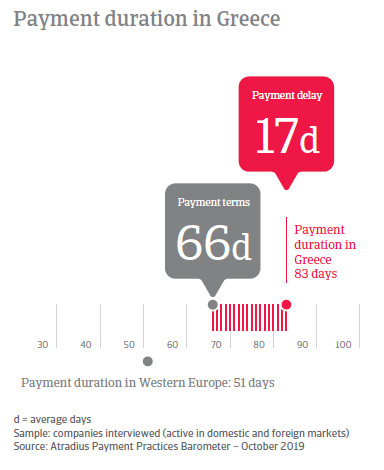 Terms for payment of invoices are the longest in Western Europe

Consistent with their focus on customer credit risk mitigation, the payment terms offered by Greek survey respondents are even stricter than last year. Average payment terms recorded in Greece stand at 66 days from invoicing (up from 62 days last year). These are the longest observed in Western Europe and compare to a 34 days average for the region.

34.8% of the total value of B2B invoices issued by Greek survey respondents over the past year was past due. This is the highest figure recorded in Western Europe, and it is well above the 28.9% average for the region. However, over the past year, the percentage of B2B payments made on time to Greek survey respondents increased to 60.9% from 52.4% one year ago. Consequently, respondents in Greece turn overdue invoices into cash significantly earlier than last year (on average 83 days, down from 92 days). This variation is consistent with observations for the region overall, where over the past year payment duration decreased on average to 51 days, down from 57 days last year. Despite this, 64% of Greek respondents (more than the 42% for Western Europe) reported no significant impact on business arising from late payments. This finding is in line with the sharp focus on credit management shown by respondents in Greece and commented on earlier. Respondents whose business was hit hard by late payments managed liquidity issues by delaying payment of invoices to their own suppliers (25% of Greek survey respondents compared to 28% in Western Europe). The proportion of write-offs of uncollectable accounts in Greece (3% of the total value of B2B receivables, up from 2.8% one year ago) is the largest in Western Europe and compares to a 2.2% average for the region. This finding points to lower efficiency in collection of overdue accounts in Greece, and is consistent with the lowest use of debt collection agencies in Western Europe, as revealed by survey findings.

Overview of payment practices in Greece

Greek respondents from the chemicals sector extended the longest payment terms to their B2B customers (averaging 82 days from invoicing). Average payment terms across the other sectors surveyed in Greece range from 78 days in the metals sector, to 52 days in the transport sector.

Over the past year trade credit risk in Greece has significantly deteriorated in both the agri-food and the construction sectors. 54% and 60% of the total value of invoices remained unpaid at the due date respectively. The metals sector recorded the greatest improvement in customers’ payment speed over the past year. Respondents in the Greek chemical sector are the longest in cashing in past due payments (on average 105 days from invoicing). Across the other sectors surveyed in Greece, the average timing it takes businesses to turn overdue invoices into cash ranges from a high of 98 days in the metals sector, to a low of 62 days in the ICT/electronics sector.

Proportion of uncollectable receivables is highest in the construction sector

In the construction sector in Greece the proportion of B2B receivables written off as uncollectable doubled over the past year (3.6% compared to 1.8%). This is the highest figure recorded across all of the sectors surveyed in the country. At the lower end of the scale, the transport sector recorded an average of 1.9% of receivables written off as uncollectable (up from less than 1% last year).

Greek large enterprises are the swiftest to cash in overdue invoices

Greek SMEs have a markedly worse track record when it comes to collecting overdue payments, with 3.5% of B2B invoices written off as uncollectable (up from 2.9% last year). The average for both large and micro enterprises is 2.7% (up from less than 2.3% last year). 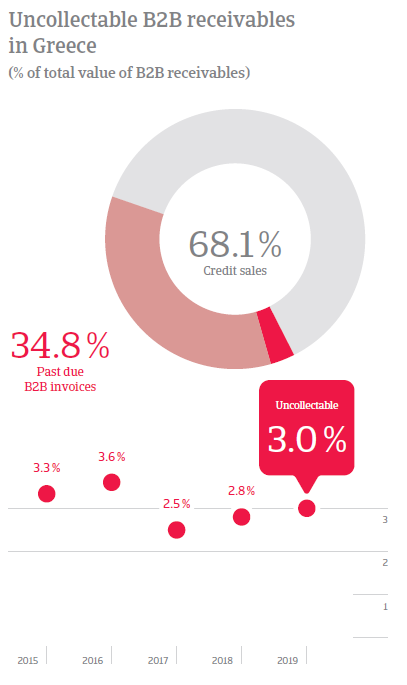 Makis Tzeis, Country Manager of Atradius Greece, commented on the report: “Greek economic growth is expected to gain momentum this year and in 2020. To achieve a long-term improvement in the investment environment, which is expected to be the main contributor of the country’s growth, it is essential to continue to implement the various structural reforms, which Greece has successfully undertaken till now.

Our survey reveals an optimistic view of the future among survey respondents. The majority of respondents believe that their B2B customers’ payment practices will not change markedly over the coming months, and that the availability of financing will not become more troublesome over the same period. However, the global economic climate has deteriorated and risks have clearly increased, therefore it is essential for businesses to have a strong focus on customer credit risk mitigation.

Particularly in these difficult economic times, a good risk assessment is much more complex than in the past. Managing the risk of customers’ payment default to safeguard cash flow, balancing out risks and cost of selling on credit terms, and avoiding severe liquidity issues are all needed to grow the business confidently. And this is where strategic credit management comes into play. This is because there are still profitable trade opportunities in challenging times. The key is to steer selling efforts away from risky customers in favour of those offering more reliable opportunities for growth.”

In 2020 household consumption is expected to accelerate, sustained by further decreasing unemployment, low inflation, and a minimum wage increase.

The global economy is losing steam in 2019 and 2020. Ongoing uncertainty regarding the trade war continues to cloud the outlook.

Corporate insolvencies are on the rise globally due to the more challenging economic environment and high policy uncertainty.