Suppliers active in the combustion engine parts and car metals segments are severely affected by deteriorating demand and a high level of competition. 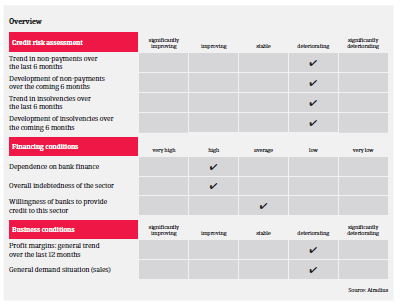 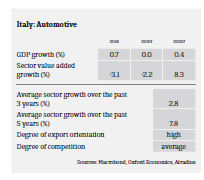 After solid growth in 2017 the performance of the Italian automotive industry deteriorated in 2018, and the mid-term outlook is rather poor, with increasing credit risk in the supplier segment. The sector performance outlook has been recently downgraded from “Fair” to “Poor”

After four years of growth, sales of Italian vehicles decreased 3.1% year-on-year in 2018 and 3.5% in H1 of 2019, according to ACEA. Last year decreasing domestic demand for Italian car components (down 7.5%) was partially offset by higher exports (up 6.6%), however, this export surge has ended with the slowdown of the automotive market in Europe, mainly hitting export-oriented Italian car part suppliers.

Given the subdued GDP growth and increased economic uncertainty, domestic car sales will likely stagnate in the coming 12 months at best. Diesel sales are affected by eco-taxes, while government incentives to support sales of low emission vehicles mainly benefit sales of foreign-made cars.

An expected insolvency increase of 5%

On average, payments in the Italian automotive industry range from 60 to 90 days and 120 to 150 days, depending on the end-buyer and whether working capital requirements can be financed by banks or suppliers. While payment experience was rather good until H1 of 2018, non-payments have increased since then, and will rise further in the coming months. The level of automotive insolvencies has been low so far compared to other industries, but business failures are expected to increase by about 5% in the coming 12 months.

This will mainly affect smaller suppliers, especially those active in the combustion engine parts and car metals segments, which are severely affected by deteriorating demand, a high level of competition and fragmented networks. In 2017 many smaller Tier 2 suppliers already experienced a decrease in equity, solvency and liquidity ratios, which has weakened their resilience to weather the current market downturn.

At the same time tyre distributors/wholesalers are affected by fierce competition and an ongoing market shakeout.

Therefore we have tightened our underwriting stance for automotive suppliers since the end of 2018, while we remain neutral to open on the OEM segment. In the car dealers segment the underwriting stance depends heavily on the strength of the brand and the size of businesses.

A subdued mid-term outlook with more business failures to come

Given the current market shake-up (shift to e-mobility, digitalization) the mid-term outlook for the industry is rather subdued. As OEMs are introducing cost-reducing measures they will increase price pressure on suppliers, probably leading to a deterioration in margins and even longer payment terms.

While Italy’s Tier 1 manufacturers are generally recognized as innovative and technologically advanced, they are poorly capitalized and highly dependent on banks to support their capital expenditures. This could prove to be a weak point given the ongoing issues in the Italian financial sector.

It currently seems that many smaller Tier 2 suppliers with low capital expenditure that are producing low-tech items lack the ability to climb up the value chain, which increases the risk of insolvency. During the 2008-2012 economic crisis many smaller players already left the market, and it seems that in the current market shake-up another wave of small businesses with low capital expenditure capacity will face the same fate in the coming 2-3 years.

At the same time the outlook for government support to help the industry in this difficult period (e.g. by domestic car sales schemes, subsidizing R&D, tax reliefs) is impacted by budget constraints and the high amount of government debt. 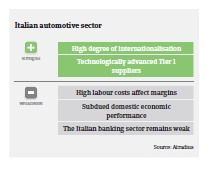 Performance is affected by slowdown in demand from automotive, uncertainty about Italian fiscal policy and the trade dispute between the US and China.

Many smaller retailers lack the flexibility and financial means to adapt business models to changing consumer habits, and the credit risk remains elevated.

Despite a significant decrease in 2018, at 74 days, the average DSO reported by survey respondents in Italy remains the highest in Western Europe.